Another Crash on 285: A Personal Injury Lawyer’s Perspective on Why

Posted in Personal Injury,Uncategorized on January 13, 2018 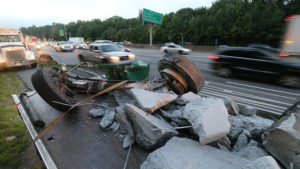 But why are crashes so common on what is clearly a major and critical roadway belting the city?  Sadly, it’s kinda easy to answer that question.  Motorists drive too fast.  Some of these same motorists drive while drowsy.  Further, distracted driving accounts for a number of these crashes.

With so many roadway crashes, speed is often a factor.  As injury lawyers, we frequently have to examine speed to determine why a crash occurred.  People speed for many reasons.  Sometimes, they are late for appointments.  At other times, they believe they are simply keeping up with the flow of traffic.  Some even speed because they believe it’s “fun.”

But the reality of 285 is that it is the wrong place to speed.  First, 285 is the roadway built to bypass Atlanta.  As such, tractor trailers, the biggest and most dangerous vehicles on the road, must utilize 285 to bypass Atlanta unless they have a delivery in Atlanta.  These tractor-trailer drivers are often implicated in 285 crashes.  Sometimes, it is because they are out of control.  At other times, it is because drivers of 2500 pound passenger vehicles don’t give the 35,000 pound tractor trailers the space and respect they deserve.

So of course, we need a speed limit increase, right?

Somewhat comically, the state had to shell out about $5M to pay for new signs that told drivers they could legally ten miles per hour slower than they were already driving.

On a more personal note, I represented the family of a young man killed by a tractor trailer in a 285 Crash.  The tractor-trailer was going 25mph over the appropriate speed limit.  I think about this young man regularly, because I drive on that stretch of 285 almost daily.  This, to me, is a not-so-subtle reminder of why the work we do as trial lawyers is important.  We help families, and we hold stupid drivers responsible.

I-285, of course, is open for business all night long.  But with that comes the increased likelihood that motorists are speeding around 285 on a lack of sleep.

So when we look at Another 285 Crash, we have to wonder whether it’s one of the 72,000 drowsy-driver crashes.

For Christ’s sake, slow down!

Finally, I’d like to touch on being alert.  This is a passion issue for our law firm.  Distracted driving is completely preventable.  CDC estimates that in 2015 alone, distracted driving caused 391,000 car accidents.  Of these accidents, 3,477 resulted in death.

CDC points out that one of the biggest distractions is the cell phone.  Reading or sending a text message typically takes your eyes off the road for 5 seconds.  This is long enough to cover the distance of a football field traveling 55mph.  I guess you go further than a football field since you can go 65mph on 285.

At our law firm, we are on a crusade against the use of smartphones behind the wheel.  This passion developed out of a case where we represented three boys who lost their mother in a crash.  We were appalled and astounded when we learned that the defendant driver had sent and read more than 250 text messages in the two hours of driving before he struck and killed this mother.

Let’s Not Have Another 285 Crash

Regrettably, we will continue to see motor vehicle crashes on 285.  But hopefully, people will slow down, wake up, and pay attention.  If so, more people will live.