Posted in Atlanta,Uncategorized on October 25, 2017

In 2016, crime was down by 27 percent overall in Atlanta, including sharp declines in major crimes such as aggravated assaults.

While this positive trend should be celebrated, crime remains a problem in the city – notably near parks and community gathering places. This has been made particularly evident by recent high-profile cases including: the assault of a mother in an Alpharetta park, the rape of a 12-year-old girl at Deerwood Park, and a sexual assault by an Uber driver in Chastain Park.

But just how much crime is happening around our parks? Which are hot spots for crime – problem areas that require closer attention? We worked with data visualization firm 1point21 Interactive to find the answer.

With their help, we analyzed eight years of crime data to develop a visual representation of all crimes within 250 feet of any park in Atlanta from 2009-2016.  The results are certainly a cause for concern.

The 25 Most Dangerous Parks in Atlanta by Type of Crime

Not all parks are equal in size or visitor volume and rate based crime statistics would be ideal to compare them.  However, accurate visitor information was not available for most parks, thus calculating crime rates for each area was not possible. Therefore, our lists here reflect raw crime figures in order to give Atlanta residents a snapshot of what is happening near city parks.

Larceny was by far the most common crime, occurring in Atlanta parks 14,668 times – more than half of all crimes in this analysis. Nearly 70% of those were larceny from-vehicle offenses – property stolen from inside someone’s vehicle.

Piedmont Park had the highest amount of crime, with 1,595 offenses from 2009-2016. Similar to citywide statistics, larceny dominated the list of crimes, with larceny from-vehicle charges accounting for nearly 60 percent of all crimes in the park. Other notable statistics include:

Freedom Park had the second highest number of crimes in Atlanta parks. Despite being 35 percent smaller than Piedmont Park, it recorded only 70 fewer crimes – a total of 1,525 offenses.

Adamsville Recreation Center had the third highest number of offenses, despite being only a tenth of the size of Piedmont Park. While larceny remains a large issue here, the more pressing concern is the high number of other offenses, including: Aggravated assaults (highest in all Atlanta parks), Auto theft (second highest), Homicides (tied for the highest) and Pedestrian robberies (third highest).

The historic Oakland Cemetery in the Grant Park neighborhood ranked fourth in total crimes, clocking in with 609 offenses. Similar to Piedmont Park and Freedom Park, larceny from vehicle crimes were the majority, accounting for 71 percent of all crimes – ranking third across all parks.

Similar in size to Adamsville Recreation Center, the unlisted conservation space across the street from Campbellton Road Community Center is another fairly small plot of land with a large amount of crime, with the fifth most crimes in Atlanta. Neighboring a major apartment complex, this area not only had the highest number of residential burglaries – about 37 percent higher than the next park – but also the second most rapes and second most aggravated assaults, tied with Adams Park.

Despite being quite a large park, Adams Park has significantly less crime than the other larger park areas. However, there are still offenses of concern: along with the aforementioned high number of aggravated assaults, Adams Park also recorded the highest number of rapes, with 7 instances.

A Breakdown by Neighborhood 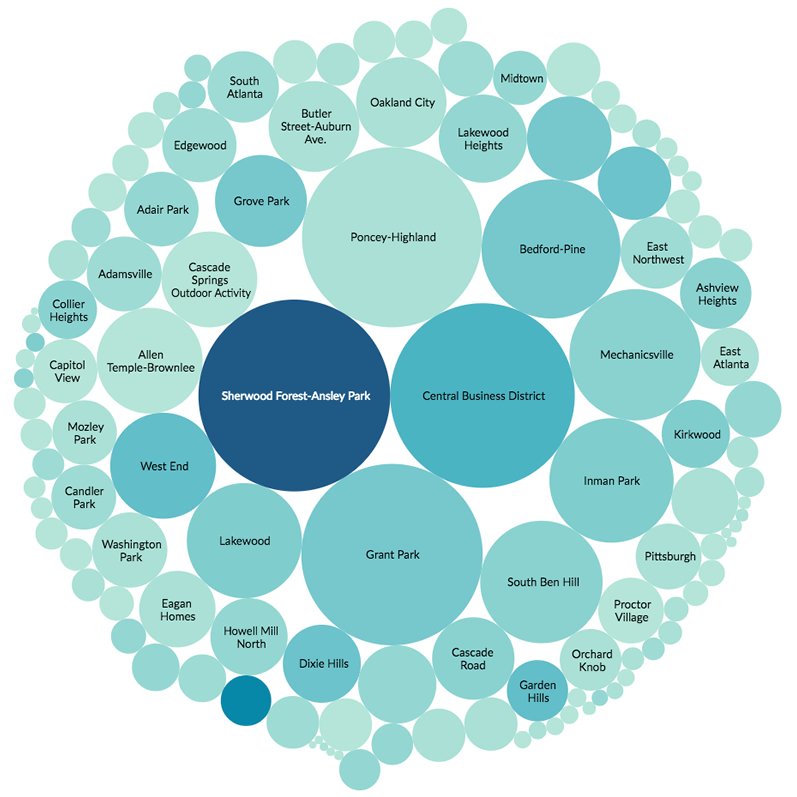